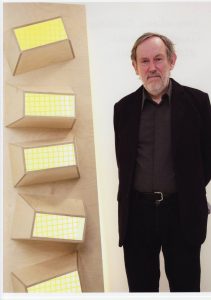 Gaston Bachelard in “The Dialectics of Outside and Inside” writes of “the interior immensity and spatial dizziness that can result even from small spaces that lend themselves to sudden accessibility”.

I consider myself to be operating within the European Modernist tradition of Constructed Art, although I have been stimulated over the last twenty years or so by American Minimalism and Phenomenal art from California.

In the mid nineties of the last century I was making free standing sculptures exclusively in ceramic. In 1997 I made a small relief again out of ceramic which was wall hung. This tentative beginning was the start of a preoccupation with the relatively shallow space which exists between a viewer and the walls which surround our lives. Ceramic was not right for this new approach, so I began making works in stainless steel, plywood, perspex, paint, mirror, gold and silver leaf, mesh and LED lights. In recent works indeterminate spaces suggested by light and reflections are contained by strongly drawn forms, (some of which are influenced by the simplicity of Romanesque and modernist architecture) and visually blocked by grids of various kinds. Repetition and shifts in viewpoints increase the complexity of the space which develops in the wall sculptures. In this context layering becomes an integral element in the build up towards a unified whole, and colour and texture add to the overall mood of the works. Although there is overtly no subject matter supporting this work other than the realities of geometric structure, the powerful impact of materiality through edge, surface and colour and the disquieting realisation of small spaces, all work together to achieve a synthesis of these qualities which has not only an intellectual dimension but also an emotional presence too. The intention throughout, by using modest means and relatively mundane materials, is to create unexpected and varied spatial experiences, not being abstract so much as simply presenting other aspects of reality based upon the the language of geometry.

All the works are carefully planned and measured in detailed working drawings in order to establish ways of constructing these often complex objects. Laser cutting, routers, jig saws and bandsaws are used in their manufacture.

While I am not interested in mathematics as a discipline, these sculptures sometimes deal with the golden section and are concerned specifically with proportion and balance. But in the end, I do not rely solely on measurement, there always remains an element of intuition.